I have been listening to Woody Shaw since I can remember. The first record I ever heard Woody on was Larry Young's Blue Note classic, "Unity" from 1965 featuring Joe Henderson, Woody Shaw, Elvin Jones, and band leader Larry Young. I was absolutely blown away with all the tunes, but there were two tunes in particular that happened to always resonate with me; Woody's "The Moontrane" which is now arguably a jazz standard classic, and his march quasi latin-swing piece; "Zoltan". I knew shortly after hearing these tunes many years ago, that I wanted to play "that kind of jazz", which I couldn't quite define at the time.

In January & February of 2022, I had the immense pleasure of collaborating with jazz guitar maestro's Rick Vandivier & John Stowell on a duo guitar project featuring both Rick, John, and I in duo formats as well as a few solo pieces. I had such a fun and challenging time working on what I considered to be the hardest jazz project I had written, recorded, and tried to undertake as a solo artist! I had so much fun with both Rick and John who I hold in such a high regard as friends and mentors of mine, and new that I wanted to do another project that would be as challenging, if not more challenging!
I remember, mentioning to John "hey I've got this cool idea of reimagining Woody Shaw's music for jazz sextet featuring us on two guitars, what do you think?" John was immediately excited and supported the idea, which gave me the impetus to take it from a thought to actually executing it!

After I knew John was interested, I began to consider who I would want to be in my "dream band". I remember asking John about his first recording date as a band leader and recording artist, and he was fortunate enough to have Billy Hart and the who's who of musicians on the date. Well, I thought, I'm going to ask who are my favorite players in the Bay Area, and see what kind of band I can put together. Having John Stowell as my fellow compatriot on the other guitar parts made this exciting every step of the way! When considering who I wanted in the rhythm section, this quote comes to mind from my friend and colleague Hal Galper "If you're looking for a drummer, ask a bass player, and if you're looking for a bass player, ask a drummer!". Well, Hal was spot on, and luckily I knew a pair that would be perfect together and for the project. I have always loved Jason Lewis & Dan Robbins playing together in the various rhythm sections they have played in together, and it was superb to hear they were both available and interested!

After considering the rhythm section and having it filled out with John Stowell (Guitar), Me (Guitar), Dan Robbins (Bass), and Jason Lewis (Drums), I wanted to consider who would be playing more of the intricately interwoven melodies Woody Shaw, Steve Turre, and many others were known for playing, as well as strong improvisers to be able to paint beautiful new melodies in the studio over Woody's complex tunes. My friend and mentor, former professor of mine from my Masters of Music at SJSU; Grammy award winning baritone saxophonist; Director of Jazz Studies at San Jose State University; Dr. Aaron Lington came to mind, he is one of my favorite jazz players, and baritone saxophonists with incredible versatility, musical depth, and character. I was incredibly honored he was interested and wanted to be on the project, then had to consider who would be on trumpet, the most important part of this project reimagining Woody's music. I asked John for a recommendation, and he highly recommended Erik Jekabson, Associate Professor at the California Jazz Conservatory, road warrior that toured with John Mayer, recording artist, composer, and educator. I spent a lot of time listening to different horn players, and I always came back to listening to Erik. His musical ideas, improvising lines, and compositional approach really resonated with me, and I knew this would be amazing if he was available! Erik was interested/available and the date was set to record! We had 1 rehearsal, and then went into the studio; recorded, and then some, cutting 8 tunes, 13-14 tracks all together in just about 8 hours. I am highly excited to get this new album out, its my most inspiring, and challenging project and musical concept to date, and my first release featuring a jazz sextet including many of the best jazz musicians in the Bay Area. This is also my 2nd project with me on electric guitar, which over the last few years has been me using my 77 Ovation acoustic, which is my normal go to guitar!

Enjoy some candid shots from the studio by Walter & Marilyn Wagner below, stay tuned for updates on a new single release as well as the official release date and album release shows!
-Jason

The Axe Axis by Jason Keiser
featuring Rick Vandivier & John Stowell
Out NOW on all platforms, streaming services, and Bandcamp below!
Digital & Physical Albums are available!​ 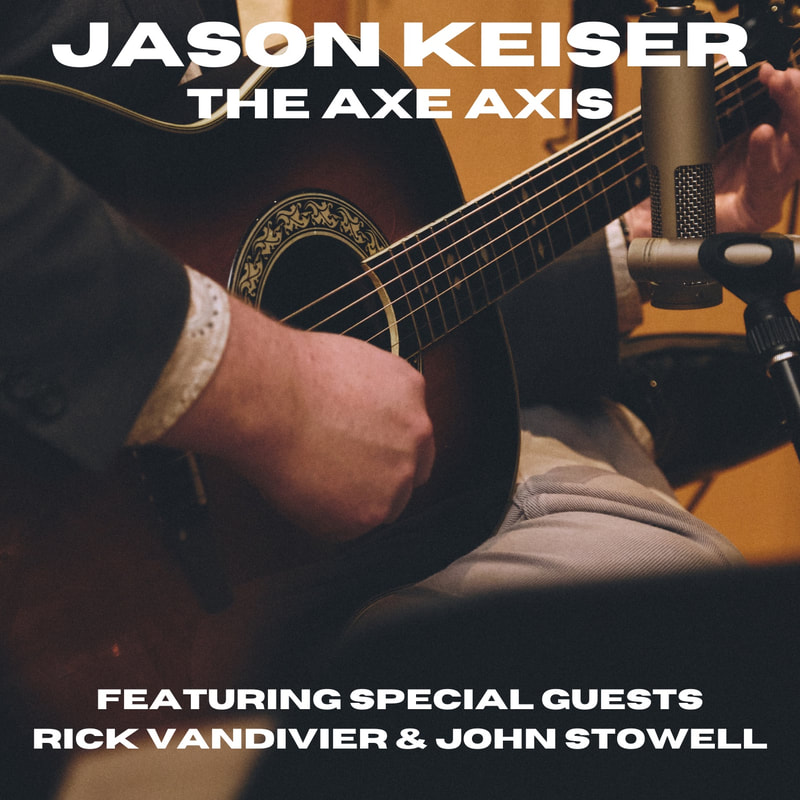 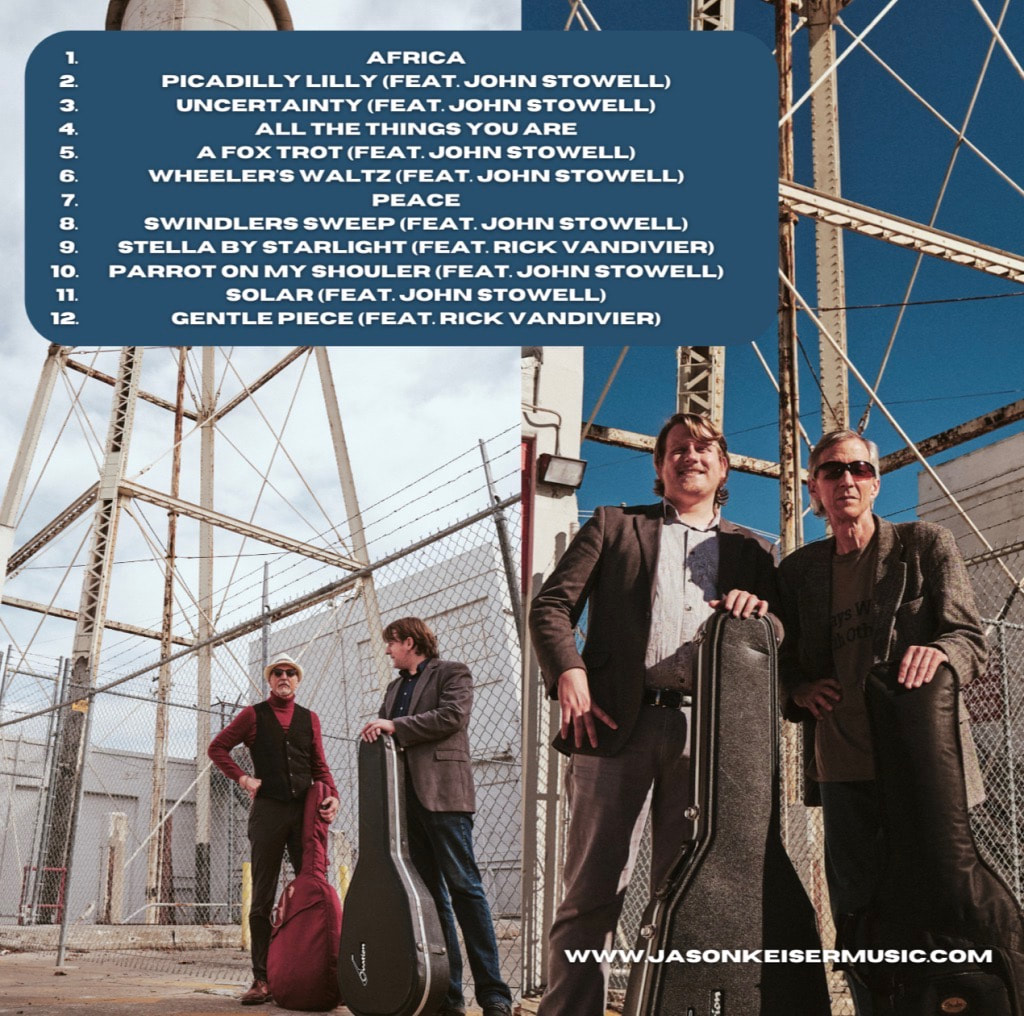 Jason Keiser is emerging as a jazz guitarist and composer to take notice of. His improvisations are spontaneous, in the moment, compositional and melodic. His songs are informed with a strong melodic sensibility, combined with some unusual harmonies that make for compelling listening.

For this recording, Jason is playing his steel string Ovation acoustic, and his sound creates a nice contrast to the electric guitars of his two duo partners, Rick Vandivier and John Stowell. Jason’s strong sense of internal pulse and judicious use of space make him an ideal duo partner in the intimate guitar duo setting. Jason has chosen a program of some of his original compositions, songs from several modern jazz composers, and a few standards. His conversations with Rick and John unfold to create beautiful synergies and dialogues that draw the listener in and take them on a journey. Jason’s three unaccompanied pieces also reveal him to be a capable solo guitarist with a well developed chord melody concept and an energetic and dynamic pulse. It will be interesting to see where Jason’s musical journey will take him next. We’ll be watching and listening.

“I recently became acquainted with Jason Keiser through our mutual friend John Stowell. Jason impresses me as a serious young guitarist, composer and recording artist with a solid work ethic and a bright future. Jason’s composition “Wheeler’s Waltz” and arrangement of Kenny Wheeler’s “Gentle Piece” evoke the tone and texture of ECM classics while advancing his own singular creative vision. I will follow Jason’s career with much interest.”
Dmitri Matheny
Jazz flugelhornist, composer, educator, recording artist